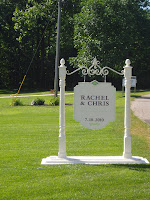 I began working with Rachel & Chris last November. They live in Arizona and were coming to Michigan to be married at her parent's lakeside vacation home. Due to distance, we planned everything by phone and mainly email.

They hired Merry Me Events for coordination and planning, Matterhorn Catering, Driving Reign band for entertainment, and Heather Gollatz Dukeman for photography. Not sure who did the flowers, but I loved her bouquet.

The couple added many personal touches and details to their ceremony and reception. He proposed to her on Saguaro Lake and they had monogrammed Saguaro cookies and the table numbers were on Saguaro cactus.

The ceremony began, like most, with Grandparents and then moms being seated. Then it took a fun departure from the norm. Once the moms sat down, fireworks were set off. With a loud bang and a burst of sparks in the sky, the groom and groomsmen were signaled! They were out on the lake and the boat carrying them came full speed to shore! There was a shot glass for each waiting on the dock, and they toasted upon departing the boat. Once they walked up the aisle, our ceremony proceeded with the bridemaids and followed by our stunning bride and father.

There were laughter and tears all throughout the ceremony, and my congratulations go out to the happy couple. You did it your way, and I commend you!
Posted by Rev. Carleen at 3:13 PM

Rev. Carleen
Kalamazoo/Mattawan, SW Michigan, United States
I am a Michigan wedding officiant/minister, and also offer wedding stationery and accessories. I am a call-in for our school district, and a wife and mother most importantly. I take the trust my couples put in me very seriously, and strive to offer the best service and products.

See reviews of With This Ring Wedding Ceremonies on Project Wedding.